African American Queen of the Road

The original stories of Bessie Stringfield, African American motorcycling pioneer, were written in the 1990s by Ann Ferrar, an author, friend and protégé of Bessie. Ferrar's narratives shed light on Bessie's hidden achievements in the pre-Civil Rights era. In PART 3 of this retrospective, Ann explores the bridge between her stories and the emotional reaction of Bessie's 21st century fans. Ferrar's coming book is the definitive biography "African American Queen of the Road: Bessie Stringfield: A Journey Through Race, Faith, Resilience and the Road." 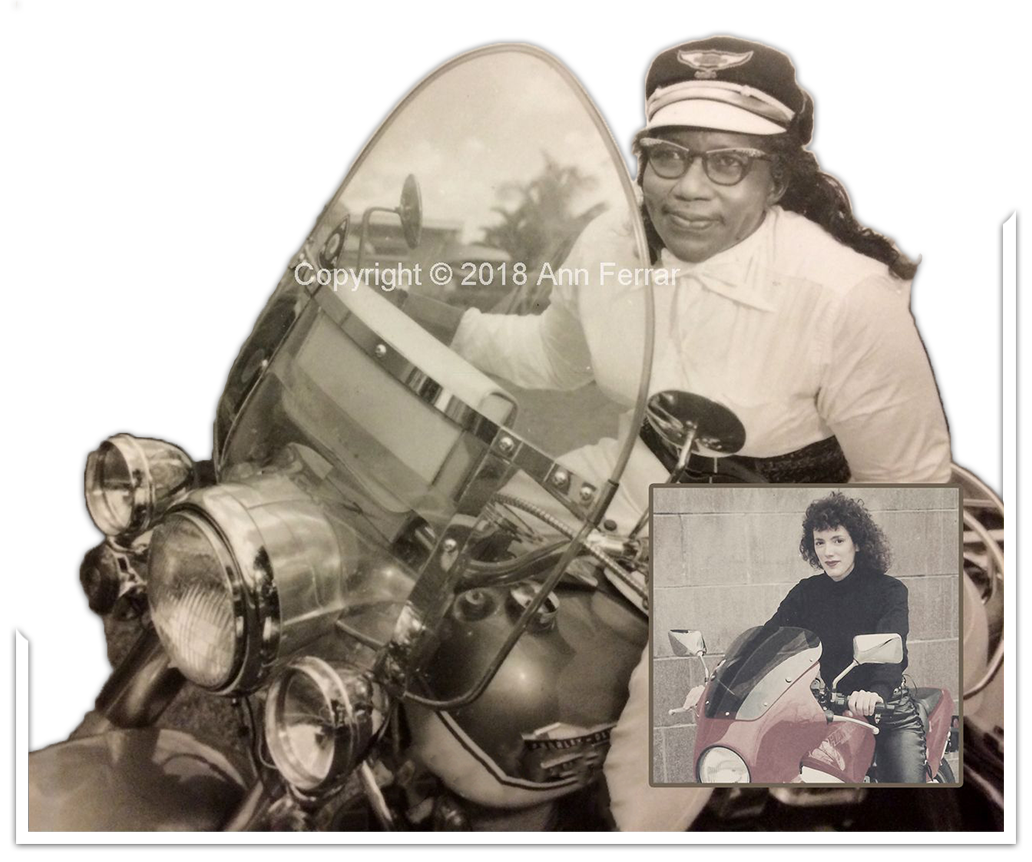 © Copyright 1990-2020, Ann Ferrar. Ann Ferrar reserves all rights to this content and her earlier stories of Bessie Stringfield, upon which this content is based. Library of Congress Registration Numbers: TXu-2-160-705; TXu-2-088-760, et al. Strictly prohibited are adaptations and other derivative works in any media. Please respect the author and the wishes of Bessie Stringfield by adhering to copyright law.

Bessie Stringfield: A Personal Legacy Project
The Bridge Between My Stories and Bessie's Posthumous Fame
By Ann Ferrar

In my view, Bessie Stringfield's strength, resilience, love and faith-based courage in the face of bigotry and sexism are what made her extraordinary. In my earliest stories I called her a one-woman civil rights movement. While Bessie did not get into "good trouble" as defined by the late civil rights leader John Lewis, Bessie got into "good mischief." My narratives described how Bessie chose an unusual way to assert her freedom—that which can only be felt in the wind on a motorcycle. Bessie, born in 1911, began riding motorcycles while still a teenager. She toured the country eight times during her 60-year riding career.

In Parts 1 and 2 of this website, I took a retrospective look at my original narratives of Bessie Stringfield's adventures between the late 1920s through the 1940s. Here in Part 3, I look back at my stories of how Bessie forged her own version of freedom in post-World War II Miami. In those stories, I described her escapades on her Harleys as bold and audacious. For one, she founded and led a group of black working men in her Iron Horse Motorcycle Club. They created many memories during group rides and weekend gatherings, though suffice it to say that not all of her neighbors were "fans."

The Miami Police Department had a certain view of Bessie, at least in the beginning. I described how Bessie dealt with repeated hassles from the police; today we call it racial profiling. Bessie protested to the precinct captain. With skillful moves, she demonstrated to him that she had more than enough talent to handle her big bike in traffic. Finally, the harassment stopped. In that era, Bessie also became licensed as a practical nurse or LPN.

During that time, some local onlookers nicknamed Bessie Stringfield the "negro motorcycle queen" and later the "motorcycle queen of Miami." These were never formal titles and people knew very little about the real woman behind these monikers. A few years ago on social media, the pop-culture label "rebel icon" appeared in a short, viral video about Bessie and it caught on, even though her millions of new fans know very little about the real woman today. They know only the highlights that I released in my short-form stories. 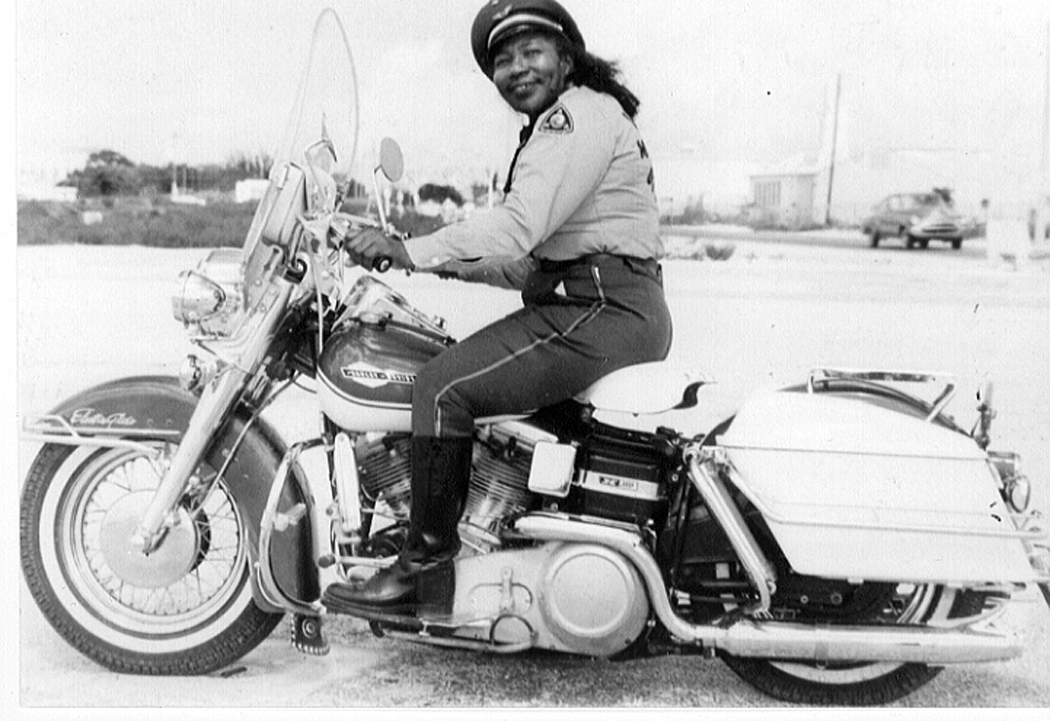 For now, I can tell you that Bessie Stringfield, while friendly to those in her circle, was essentially a mystery. On her bikes she was an aloof, fleeting figure cruising past the eyes of onlookers. Bessie kept her cards close to her chest. She was a private citizen, by no means a public figure. Bessie told me, "I didn't want nobody [sic] knowing my business except for the Man Upstairs." And thus no one—not her Iron Horse buddies and not even her husbands—really knew what made her tick. They did not know much about her beyond the version of Bessie standing in front of them during different phases of her life. I spent time with some of Bessie's closest peers, including her last husband, who confirmed her secretive, independent nature.

As a senior, Bessie was still riding Harleys for as long as she was physically able. In one of our last recorded conversations, she said, "I told the doctor that if I don't ride, I won't live long. And so I never did quit." But in reality, her chronic heart condition had already forced her to retreat from the road. In 1993, at the age of 82, she succumbed to her illness. Bessie had told me, "They say my heart is three times the size it's supposed to be." I have always felt this is an apt metaphor for an unconventional woman whose heart and spirited determination have touched so many lives.

For me, as the author-originator and steward of the Bessie Stringfield story, it has been fascinating to watch the building of a bridge between my stories of Bessie and how she is perceived and admired by fans around the world today. I have watched how Bessie has risen in stature from hidden figure to posthumous global legend. Her legacy far transcends motorcycling. Today, Bessie Stringfield is regarded as a culturally significant figure to a new generation that recognizes her bravery as a woman of color and her defiance of traditional gender roles.

"In this age of renewed female empowerment and overdue

in the quest for inspiring hidden figures from the past.”

African American women have told me they feel an emotional connection to Bessie Stringfield. Black women and their male peers hold Bessie up as a role model of cultural pride; they are proud of her for being unapologetically black. I have received hundreds of emails, Facebook messages and comments posted online from people of all races, including many who have never been on a motorcycle. My readers come from across the USA, Canada, South America and Europe, and all the way from Australia, New Zealand and India. It is clear that one doesn't have to be a motorcycle enthusiast, or a person of color, or a woman, to be inspired by Bessie Stringfield.

I have been interviewed about Bessie for major media outlets ranging from The New York Times to the German news and culture magazine Der Spiegel, to Vice.com for the LGBTQ community. Admiration for Bessie Stringfield could not possibly be more simultaneously diverse and universal.

On another level, the worldwide popularity of the inseparable conjoined twins—Bessie and my stories on Bessie—has given her an unexpected and sometimes runaway afterlife in cyberspace. Neither Bessie nor I could have predicted this when we began our personal legacy project 30 years ago. Back then, not all communities across the USA (and indeed, across the world) were even wired for the internet. The launch of social media was still years off in the future.

Fast-forward to today's digital age. Along with the well-deserved recognition for Bessie, my stories about her were shredded and fed anonymously into the internet content-mill. In 2017, an independent company named Timeline, lifting from my story of Bessie in Hear Me Roar, produced a three-minute video that went viral. Practically overnight, Bessie—or rather, a symbolic, highly condensed version of her—became posthumously famous among 20 million people who had never heard of her before. 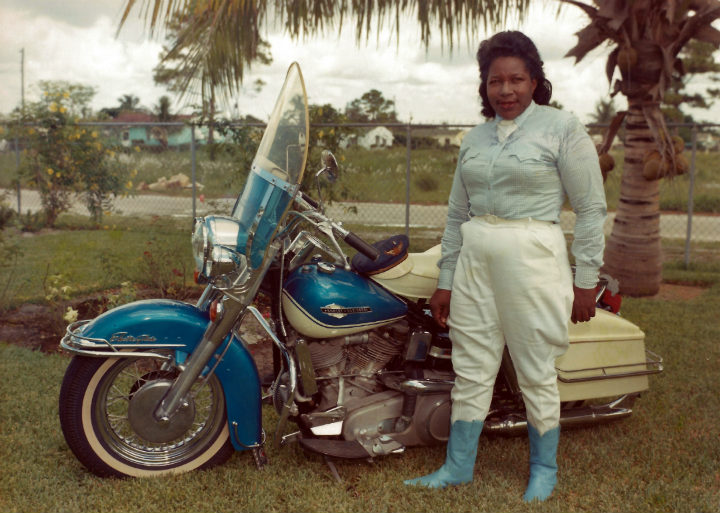 The mature Bessie Stringfield, Copyright Ann Ferrar Collection.
This photo is one of many given by Bessie to Ann with original film negatives.

Bessie Stringfield is recognized now as a pioneer for overcoming racial and gender bias in one of the most difficult periods in American history. Yet today, internet fame in our celebrity-obsessed pop culture is tricky. Superficial fame can affect the integrity of Bessie's memory. There have been various instances of this. Here, I will share just one because it is so absurd. Last year, a major hotel chain / credit card partnership approached me, asking if they could use Bessie to promote their brands. In saying an emphatic NO, I pointed out the irony of their request: that in her heyday, Bessie would have been turned away from their hotels and denied credit from their bank. Then come the small-time profiteers, like vendors who pirate and sell photos from my collection. Now, it is rumored that someone is claiming to have Bessie's old Iron Horse uniform for sale. The garment, if it exists, likely belonged to another club member or was replicated from photos.

My position as the only knowledgeable source for the complete spectrum of Bessie's life—including that which is celebrated, that which is still unpublished, and even that which is controversial—comes with responsibilities. My first responsibility is to Bessie Stringfield and that which she shared with me in confidence. For instance, she kept secrets about her past that she chose to escape from.

Bessie told everyone she'd been born in Kingston, Jamaica, that she was brought to New England by her biological father, abandoned there, and then adopted by whites. Yet Bessie was born in the southeastern region of the United States to mixed-race parents and it was she who left. However, when Bessie gave me the gift of her life story, she asked me not to write about certain sensitive things until well after her death. I have respected Bessie's wishes.

I held fast to that promise in 2018 when a major international newspaper featured Bessie in a new series of obituaries, meant to pay belated respects to notable yet overlooked women of color. The paper asked me to reminisce about Bessie and I did. However, I would not discuss the sensitive matters she had confided to me. I explained that the gray areas of Bessie's early life need to be handled with the nuance and context that only my long-form biography will allow. Surprisingly, the resulting obituary left no room on the canvas for the unfinished parts of Bessie's portrait to which I had alluded. Rather, the obituary simply dubbed the gray areas "untruths" and web encylcopedias repeated it. For now, I'll only say this: Everyone will just have to wait for my definitive biography.

If Bessie Stringfield was ahead of her time when she lived, then clearly her time is now. In this age of renewed female empowerment and overdue recognition of black lives, Bessie stands out in this generation's quest to find inspiring hidden figures from the past. On a personal note, Bessie Stringfield was perhaps the most unexpected role model who ever came into my life. She inspired me to be resilient on the road and in womanhood as well. From Bessie I learned to push through certain obstacles with advice from a different angle that was not within the grasp or experience of the traditional, Italian American matriarchs in my family. Likewise, Bessie has set an example for thousands of African American women who have taken up the torch of her legacy on their own long-distance voyages today.

Bessie was outspoken when she needed to be. She is still inspiring me to assert my own voice, as I have done here, both as the bonafide author-originator of the Bessie Stringfield story and as a reflective, mature woman who learned a lot from my subject and her peers. There are no cyberspace substitutes for the human connection, friendship and unity between Bessie Stringfield and me in the final years of her life. I just wish Bessie were here to see that her legacy lives on in me and in countless people around the world today. — Ann Ferrar 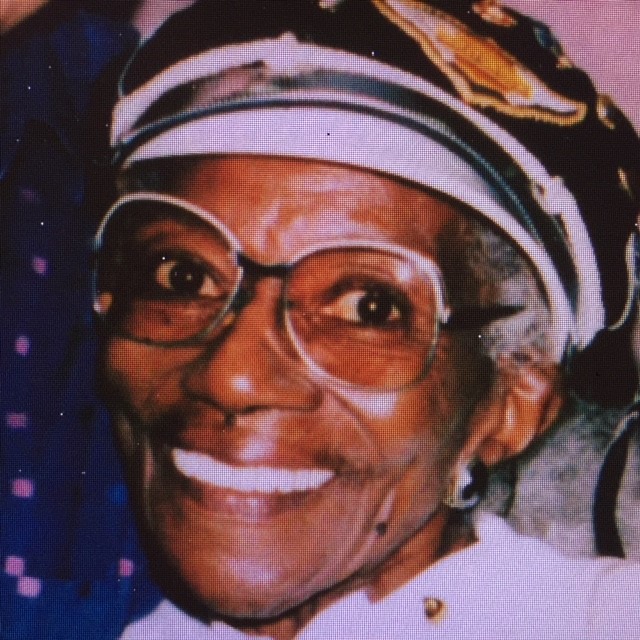 The elder Bessie Stringfield via Ann Ferrar Collection.
In 2002, the author's work to preserve and write Bessie's story was finally rewarded when
Bessie was inducted posthumously to the American Motorcycle Hall of Fame.

© Copyright 1990-2020, Ann Ferrar. Ann Ferrar reserves all rights to this content and her earlier stories of Bessie Stringfield, upon which this content is based. Library of Congress Registration Numbers: TXu-2-160-705; TXu-2-088-760, et al. Strictly prohibited are adaptations and other derivative works in any media. Please respect the author and the wishes of Bessie Stringfield by adhering to copyright law.