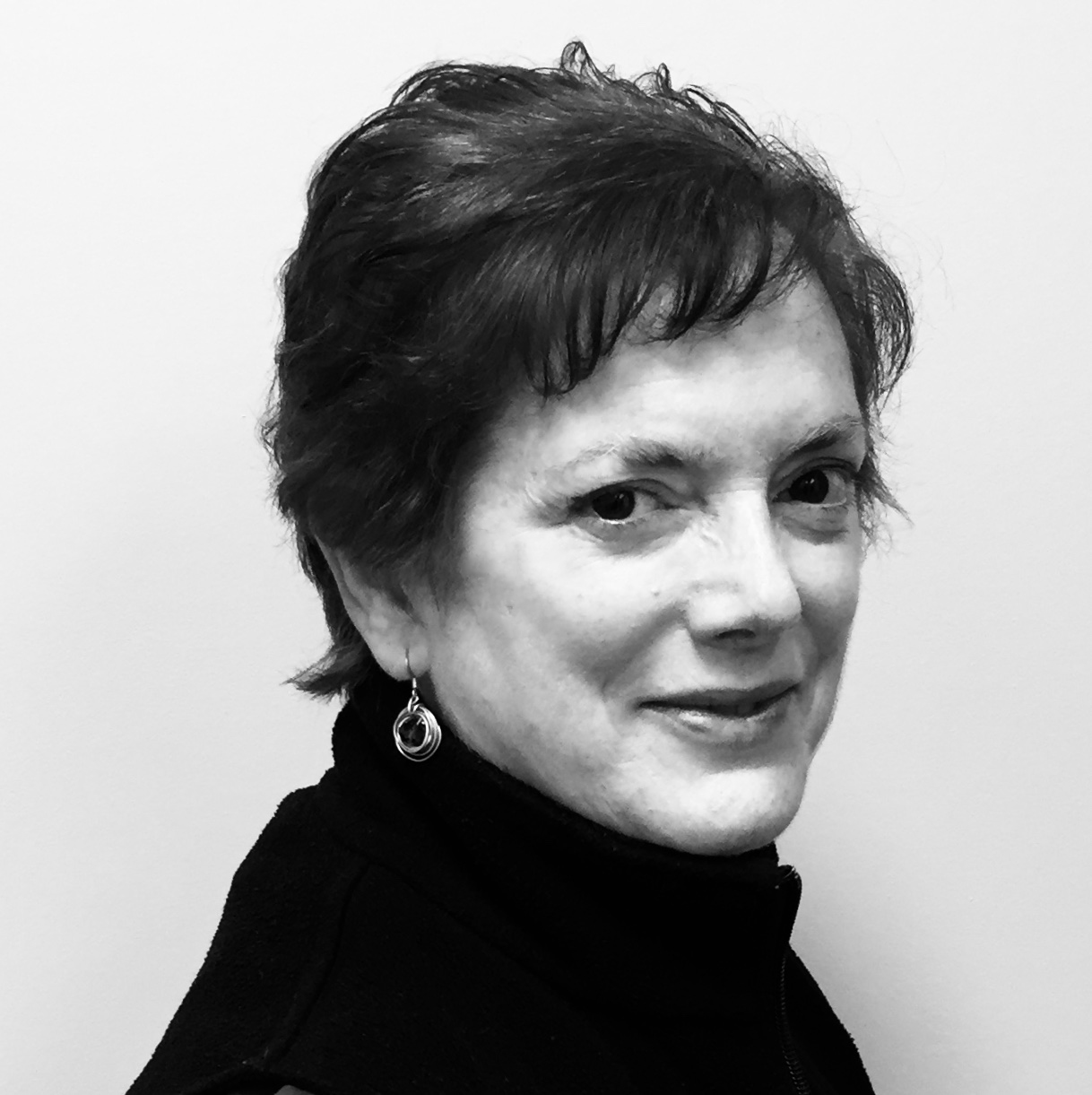 Ann Ferrar is the author of the coming biography African American Queen of the Road: Bessie Stringfield—A Woman's Journey Through Race, Faith, Resilience and the Road. In her first book, Hear Me Roar (NY: Crown, 1996), Ferrar introduced Bessie Stringfield to the world with the story "Bessie B. Stringfield: The Color Blue." The author adapted "Bessie/Blue" for the American Motorcycle Hall of Fame Museum when Bessie was inducted in 2002. 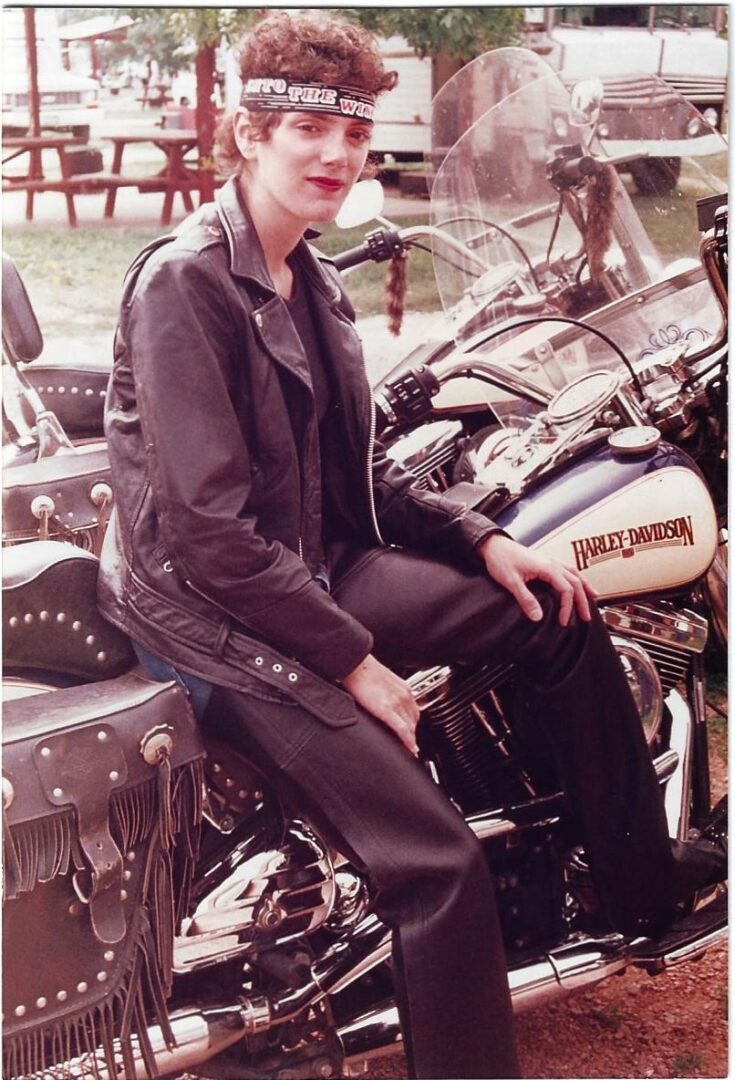 Writer and biker Ann Ferrar, biographer of Bessie Stringfield and author of Hear Me Roar: Women, Motorcycles and the Rapture of the Road, at the Black Hills Motor Classic in Sturgis, South Dakota, August 1990. During that same extended road trip, Ann met Bessie Stringfield for the first time. Ann is writing Bessie's biography, African American Queen of the Road. Photo by Becky Brown, Founder, Women in the Wind. 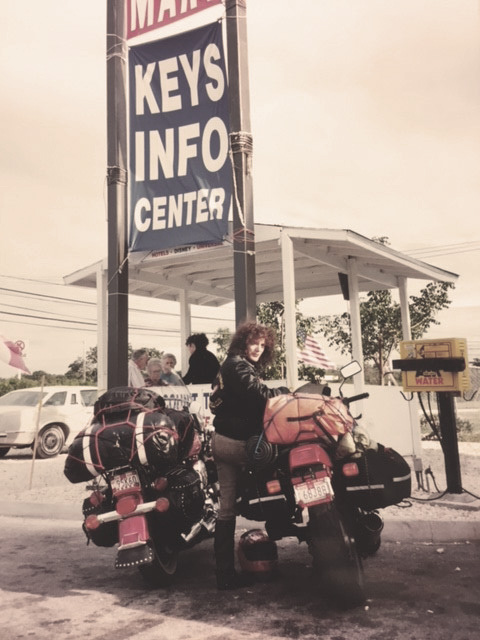 Ann Ferrar with her fully loaded Honda Hawk GT650 on a trip to the Florida Keys after Daytona Bike Week, 1993. This was one stop among many during Ann's long-distance road trips for her earlier book, Hear Me Roar: Women, Motorcycles and the Rapture of the Road (NY: Crown, 1996). In Hear Me Roar, the author introduced Bessie Stringfield to the world.

Journalist and author Ann Ferrar is an accomplished writer of narrative non-fiction from New York City. She is the biographer of Bessie Stringfield and the author of a groundbreaking book on women in a non-traditional milieu, titled Hear Me Roar: Women, Motorcycles and the Rapture of the Road (NY: Crown Trade Paperbacks/Random House, 1996). Ann's upcoming book is the biography African American Queen of the Road: Bessie Stringfield—A Woman's Journey Through Race, Faith, Resilience and the Road.

Ferrar, with her decades-long track record in journalism and narrative non-fiction, has written feature articles for The New York Times, American Motorcyclist and online venues, such as the website of the American Motorcycle Hall of Fame Museum, where she wrote about Bessie Stringfield for her induction in 2002. Prior to Ann's most famous story of Bessie published in Hear Me Roar in 1996, this museum and others actually knew very little about Bessie Stringfield. Ann's story in Hear Me Roar, called Bessie B. Stringfield: The Color Blue, helped get Bessie inducted to the Hall of Fame, and the story was read by the emcee at Bessie's induction ceremony.

Hear Me Roar was the first book ever written on the history of female bikers. Throughout her career, Ferrar has written other feature stories and essays on women's issues, health and lifestyles, and a variety of human interest topics. Her articles have been published in major international magazines, websites and via syndication.

Ann's curiosity and skill at finding and writing about notable yet overlooked women led the author to conduct and audio-record a series of interviews with Bessie Stringfield. Ann's exclusive, copyrighted sound recordings, in which the author elicited Bessie's memories, are the foundation upon which Ferrar further researched and crafted her published narratives on Bessie Stringfield, in print and on the web. Note that Ferrar's material, which includes the author's expression of thought on the life and times of Bessie Stringfield, is not in the public domain for unauthorized use by other parties.

Bessie Stringfield was an undiscovered pioneer who rode motorcycles around America in the pre-Civil Rights, pre-feminist decades. Ferrar's African American Queen of the Road  biography has never-before-published stories of Bessie's private life, which are embedded in Ferrar's tapes but which the author has been saving for her book. Ferrar's exclusive tapes of Bessie—the only sound recordings of Bessie Stringfield in existence—are the bedrock of the new biography.

In 1990, at the start of her research and writing of the first edition of Hear Me Roar, the author met Bessie Stringfield. In addition to Bessie, Ferrar met and interviewed more than 100 women, rode tens of thousands of miles around America on her own motorcycle, and was a participant-observer in scores of rallies and other events. Ferrar's archival research, along with interviews of descendants of early 20th-century riders, yielded the first chronicle of these forgotten pioneers of the American road.

Hear Me Roar  was critically acclaimed, cited in scholarly studies of women in non-traditional roles, and covered by The New York Times, CNN, Entertainment Weekly and other mainstream media outlets, in addition to the motorcycle press.

Over the years, Ferrar has been consulted for her expertise on the history of women riders, especially for her knowledge of Bessie Stringfield. She was consulted for a segment about Ms. Stringfield on CNBC's Jay Leno's Garage. She has contributed her expertise to museums and appeared in PBS and History Channel documentaries, including Glory Road: The Legacy of the African American Motorcyclist and American Biker. The author was a guest lecturer at the Women's Studies Department at the State University of New York at Stony Brook. She has given seminars at colleges, libraries, and at events for riders and women in the general public.

Ann rode her own motorcycles for 18 years, owning six different bikes. She began in her native New York City and became an assertive urban rider and a long-distance solo rider, covering 35 of the 48 lower U.S. states and parts of Canada. It was a natural transition for Ann to switch from writing for national women's and health magazines to writing freelance cover features for the Driving and Travel sections of The New York Times.

A member of the Authors Guild and PEN America, Ann lived in TriBeCa in Lower Manhattan for many years, where she was nicknamed the Literary Biker Chick for her combined passion for writing and riding—via her pioneering work on Hear Me Roar; her freelance motorcycle articles for The New York Times; her many road trips around the country; and her participation in countless biker rallies.

In the 1990s and early 2000s, Ann was one of the then-few, well-known long-distance women bikers in the New York area biker community. The number of female bikers has swelled greatly since then. In 1996, Ferrar was recognized by the American Motorcyclist Association with the Hazel Kolb Brighter Image Award for Hear Me Roar, which was the first book ever written on female motorcyclists, and which inspired many more women across the country to take control of the handlebars.

Ferrar still lives in the Greater New York tri-state region of the USA with her two rescued Staffordshire bull terriers. At present, Ann is not actively riding motorcycles. Instead she is immersed in adventures of a different sort, finishing the biography African American Queen of the Road: Bessie Stringfield, A Woman's Journey Through Race, Faith, Resilience and the Road. Plus, a Global Edition of Hear Me Roar, with female bikers on six continents participating, will be finished in the future, after the Bessie Stringfield book. Release dates for both books are TBA.

Freelance feature articles written by Ann Ferrar on motorcycling and Bessie Stringfield include:

"Riding the Road to a Cure: The Pony Express Ride for Breast Cancer Research," InTouch: The Good Health Guide to Cancer Prevention and Treatment, May 2002

"Bessie Stringfield, Inducted 2002," written by Ann Ferrar for the website of the American Motorcycle Hall of Fame Museum (Pickerington, OH). The story was adapted by the author from her book Hear Me Roar, and was reissued as "Bessie Stringfield: Southern Distance Rider" for the National Motorcycle Museum, Anamosa IA. (Abridged versions of the story are still posted.)

There are also many independently reported articles by journalists who have recognized Ann Ferrar's expertise on Bessie Stringfield, cited Ferrar's original works on Ms. Stringfield, and reviewed her book Hear Me Roar, discussing Bessie and the history of women bikers with the author. Here is a select list of independently reported articles including interviews with Ferrar, spanning a quarter-century. The author has been interviewed on-camera in news features and documentary films as well.

MacKay, Liz: "It's a Woman's Sport—The Evolution of the Female Motorcyclist: Ann Ferrar, Hear Me Roar: Women, Motorcycles and the Rapture of the Road," Motorcycle Industry Magazine, July 1996

"Ann Ferrar and Hear Me Roar" television news featurette in All About Women series, CNN, summer 1996

Glory Road: The Legacy of the African American Motorcyclist: documentary film shown on PBS and The History Channel, 2008

Professional inquiries only can be sent to author@bessiestringfieldbook.com.